The Executive Officers (President, Vice-President, Secretary, Corresponding Secretary, Treasurer and Parliamentarian) are elected to 2-year terms. A nominating committee, appointed by the President, solicits a slate of candidates during the month of April. The candidates are presented to the membership and voted on at the May meeting. Nominations may be made from the floor if all candidates agree. Otherwise, nominations from the floor will not be accepted. 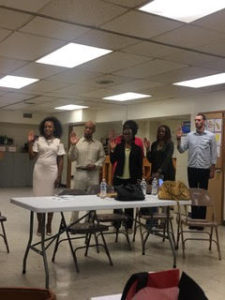 Newly elected officers are sworn in at the June meeting, and begin serving the new term starting in September. The President appoints committee chairpersons.

A grassroots network of Block Captains serve as ambassadors through which concerns and information are shared between the association and its members. The association also publishes a monthly, sometimes quarterly, Newsletter.

Our success in accomplishing the association’s goals can only be achieved to the extent that all the neighbors in Penn Branch participate to ensure that the community we chose to live in remains a community we want to live in.